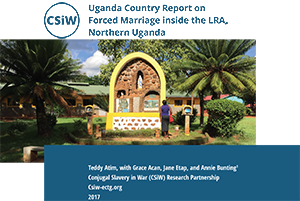 KEY FINDINGS
The purpose of this country report is to share the findings of interviews with 48 female survivors of the conflict in northern Uganda. The interviewed women were all abducted, held captive for long periods of time and forced into conjugal relationships. This report shares new knowledge about the nature of women’s experiences of captivity and complex victimhoods. First, we present a more nuanced picture of women’s diverse experiences based on their age, length of time in captivity, roles, and the commander to whom they may have been assigned as a ‘wife’. This more complicated story is also true for men who were abducted and whose experiences in the war depended on their rank and role within the LRA. A second important finding was how women exercised creative agency and resistance within their conditions of captivity. Third, as other studies have documented, the LRA was a highly organized movement with complex rules, including rules related to sexual relations between men and women. The assignment of women as ‘wives’ was part of the internal laws or rules of the LRA. Finally, women described their ongoing struggles on return and reintegration in to their communities. Many participants spoke of the stigma they and their children endure on a daily basis. The report concludes by summarizing what women identify as their needs for reparations.